Fifty years of food is 'a family affair' 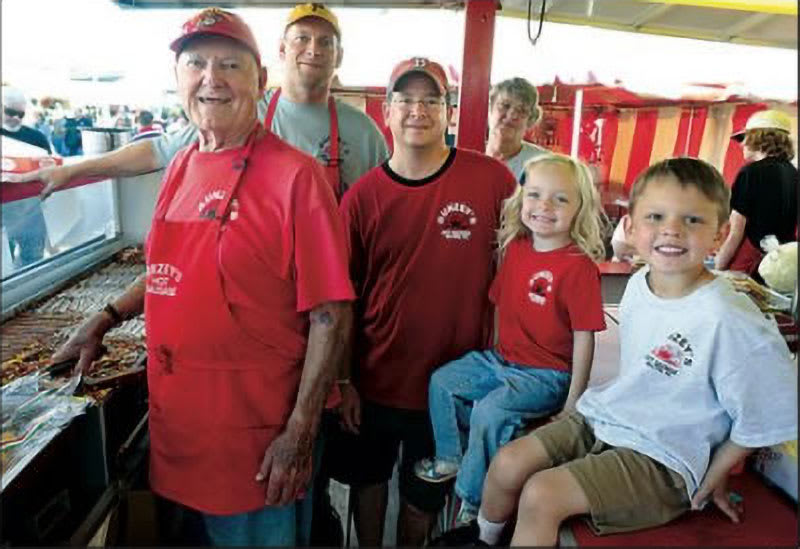 BLOOMSBURG - Harold “Gunzey” Gonzales was 38 when he bought a stand at the Bloomsburg Fair and started selling his family’s special-recipe hot sausage.

Fifty years later, Gunzey still starts cooking at 5 a.m. and doesn’t get to bed until 11 p.m. But with the help of three other generations of family members, the octogenarian manages to fit a nap somewhere into his day. “It’s a family affair,” he says.

Gunzey got his nickname when he was a gunner in the Marines during World War II.

He met his late wife, Lois, through a Marine pal who was her cousin, he says. In 1947, he opened his first restaurant at the current site of The Fence Drive-In in Milton, selling hamburgers, hot dogs, and chocolate milk.

But it wasn’t until 1963 that Gunzey purchased the fair plot and the couple started hawking hot sausage. The previous owner of the tent on Third Street, between C and D avenues, sold hot sausage. “But nothing like ours,” said Gunzey’s daughter, Theresa West.

Many other vendors buy pre-made packs to cook up, said grandson Todd West.

Not Gunzey. The family will soon start selling its special-recipe sausage in select grocery stores.

I love the people

Gunzey, a Shamokin native, and his wife prided themselves in selling a quality product, the family says. “It’s surprisingly low fat, for a sausage,” said Todd. As his grandmother said, “I’ll never sell anything that I wouldn’t eat.”

Lois chopped 100 bushels of peppers — about 4,000 individual peppers — every fair week, prepped the onions, and talked to everyone who stopped in for a sandwich. “She talked while she was cutting,” Theresa recalled.

Gunzey’s wife often joked she was the brains while her husband was the brawn, prepping the food and working the kitchen from sun up to sun down.

The family says it pioneered a breakfast sandwich called the Barnyard — with sausage, egg, and cheese — before fast-food chains took the idea mainstream.

And when dedicated patrons clamored for soups, someone lugged a stove onto the fairgrounds to accommodate them.

In recent years, the family has halved its fair commitments, paring 10 appearances to just five each year.

Some family members work or are in school during the fall festivals, and Gunzey himself is starting to slow down.

But he has no plans to retire. “I love the people.” And he knows of too many who die soon after they stop working.

You can visit Gunzey’s at its original location on Third Street, or 11th Street near D Avenue where it has a second stand.

The family recently launched a website dedicated to the links, complete with family recipes: http://www.gunzeys.com/